I used to share every single interesting thing I come across on social media. Any content that made me laugh, caused tears to stream down my face, or even those which left me fuming with anger, were all shared,  just because I could.

At first, I didn’t think much about it. It’s just sharing content, right? However, over time noticed a similar pattern in my actions and emotions when it comes to sharing content on social media: 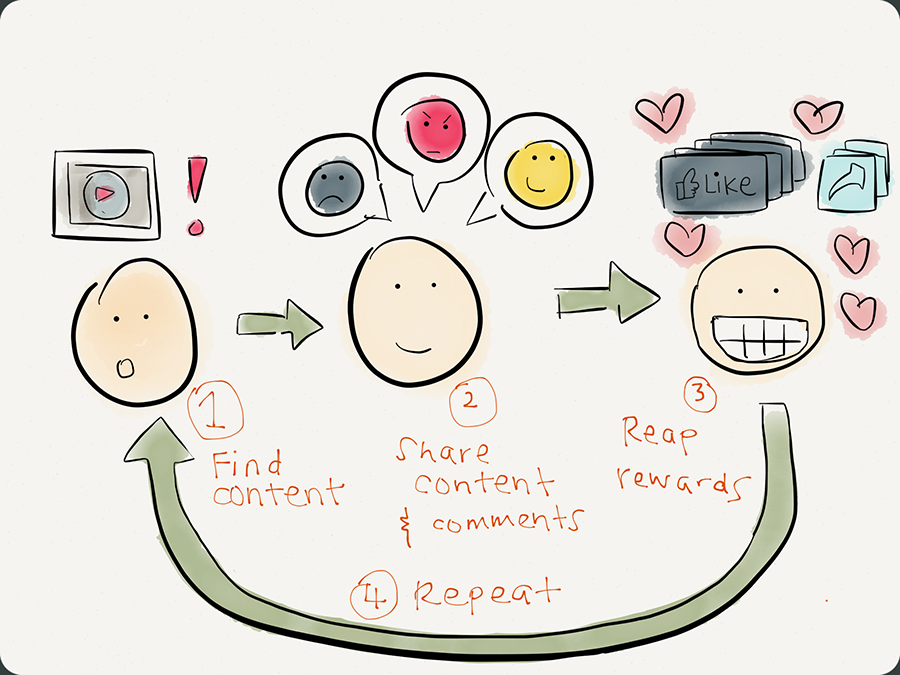 First, I noticed that whenever I find content that I found interesting, the first thought that comes to my head upon consumption of said content is: “I should share this.”

Then, without any hesitation, I’d click on the “share” button, spend a minute (or maybe fifteen?) adding my thoughts and feelings as comments, and then give my confirmation: “Submit”.

My shared content and comments now online, I’d then spend the next few minutes “casually” reloading my page again and again, feeling my heart skip a beat whenever the number of likes and shares increase.

When that number eventually plateaus, I then find myself subconsciously looking for the next piece of content to share or comment on. In my mind, I could see nothing wrong in what I was doing; in fact, I was doing a service! I was educating people with my “insights” or delivering entertainment, depending on the nature of the content.

Unfortunately, without realising it, I had gotten myself addicted to the “rewards” of sharing content — the affirmation of my opinions, the satisfaction of receiving attention, and the security in making connections.

If you find yourself sharing content the way I did, then your sharing is probably doing more harm than good

There are two entities that are in danger of harm when you start sharing content in the above pattern: the self and society.

Harm to the self

The first and more obvious harm will fall on the person sharing the content, for his sharing creates a false sense of affirmation, satisfaction, and security within himself. Sharing in this form inflates the attention-seeking ego, and the person will over time find himself dependent on the “rewards” he receives from sharing. When dependent, the person’s emotional health fluctuates according to the number of likes and shares.

As an example, an acquaintance shared with me that because she was so used to getting more than a hundred likes for each of her Instagram pictures, on the rare occasions that her pictures don’t gain much traction, she feels depressed and obsesses over the next picture so that she can get her “high” again. Every day, she finds that she must share an interesting content in order to get her fix of likes and shares.

Her sense of self-worthiness is now attached to a little heart-shaped icon in Instagram applications around the world; The more hearts given to her, the more she feels her heart is complete.

Another way the harm manifests itself in the self is that the person will eventually feel the pressing need to inflict his opinion on everything, regardless of the suitability of the context, in order to get more of the “high” I mentioned earlier. In time, the number of likes and shares is interpreted by the self as a form of authority and self-validation, thus giving him the illusion that his opinion is worthy and important.

Social media makes this even easier as it gives people access to an otherwise unreachable other while at the same time maintaining a barrier of distance between the two. This eventually leads to a sense of non-accountability; “I can and will say whatever I want, for no harm will come to me from it.”

We see the effects of this happening everywhere. A very simple example would be the lack of adab shown by Muslim commoners who argue with scholars and shuyukh that have been studying the deen even longer than they were born.

The companions of the Prophet SAW always discussed issues on the religion, but they never forgot to uphold their adab, they constantly deferred to the more knowledgeable person, and they never argued for the sake of their egos. Imam Shafii RA even said:

“I never once argued with anyone hoping to win the debate; rather I always wished that the truth would come from his side.”

How far have we strayed from their good example?

The second harm that the above type of sharing does is that it increases the volume of noise in society.

The nature of man is that we are more easily attracted to that which entertains, even if it doesn’t hold any benefit. It is no surprise that in South Africa, a radio programme dedicated to just good news finds itself shut down barely months after due to a lack of listeners, and everywhere around the world, trashy newspapers filled with crime, sex, and gossip are usually the highest grossing publications in the country.

In fact, a study by a local Malaysian TV station last year found that in Malaysia, a country inhabited by a majority Muslim populace, people want only three things from the media: more gossip, more popular celebrities, and more avenues to state their opinions.

Bottom line, we are addicted to noise, both in its consumption and its creation. What we don’t realise is how harmful noise can be to the health of society in general.

Take the ongoing case of the missing MH370 flight for instance. While Malaysian authorities are trying their best to communicate and relay the right information, thousands of people and slanted media organizations are sharing all sorts of “information” and theories online.

I say “information” because they were really just noise; People continuously lap up and spread staged videos and false accusations because of their inherent entertainment factor — the mystery of a vanished aircraft, the shock-factor of a purported government(s) cover up, the tragedy faced by the missing 227 passengers aboard the flight.

We have a real-life Hollywood movie, y’all!

The damage that noise wields is three-pronged.

Firstly, noise drowns the voice of truth. As more and more noise fills the Internet, it gets harder for anyone to sort out the good from the bad.

Secondly, noise gives credibility to falsehood. When a lie gets circulated enough, it ceases to be a lie and instead gets upgraded to the status of truth.

Lastly, noise distracts from truth and truth-seeking. When people start to take lies as truth, then they eventually stop looking for the truth, and worse still, they start looking at real truth with suspicion.

In the case of flight MH370, the government had to spend extremely valuable hours just to dispense the many lies circulating around the web. Every day, the government has had to hold a press conference just to address these lies and accusations that pop up online. These are hours that could have been put into the actual search and rescue itself.

So what does all of these mean?

Not at all. It just means that we need a smarter approach to sharing. 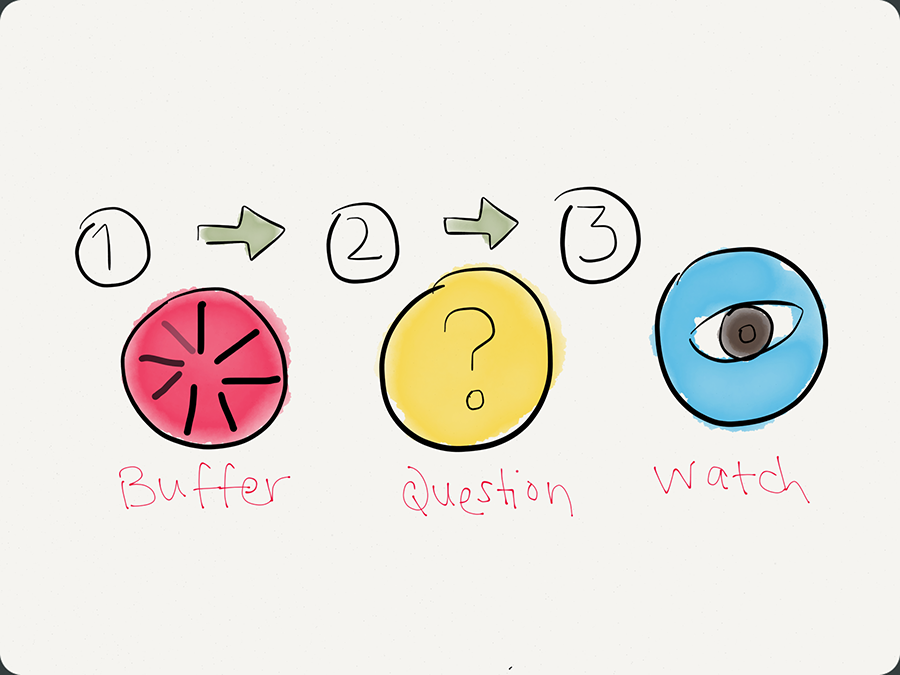 Step 1. Install the “buffering” application in your system
While the buffering process is often met with disdain when we’re surfing the Internet, we should actually implement it in our life. Every time we feel the urge to share something, instead of automatically clicking on the “share” button, we should let our system buffer.

Pause. Hold the feeling. Freeze the moment. And then proceed to the second step.

Question 1: Why am I sharing this?
Is it for the benefit of others, or for the sake of your ego? Ask yourself why and why again until you get to the root of your intentions.

Question 2: Is what I am sharing beneficial, truth, or is it just noise?
If your intentions are right, then it is time to scrutinise the content you’re sharing. Is what you are sharing beneficial? Is it the truth? Spend some time in research to check for credibility and authority of sources. Read this free guide on online content verification if you’re serious.

If it’s you who are creating the content (e.g. an opinion piece, a comment), then spend more time reflecting how your content contributes to the ongoing public conversation. Will the content you are creating help anyone? Will it be something that will testify for you and not against you in the akhiirah?

Remember, online content is permanent, despite its seemingly transitory nature.

Question 3: Is it of the right adab if I were to share or comment on this?
Who is the person you are intending the message for? What is your status of knowledge compared to his? How are you delivering the message?

Step 3. Learn to watch the itch to share go away
Personally for me, the first questions strips off 60% of the content that I want to share, whilst the second question deletes the remaining 35% of it.

Over the months, I’ve learnt to notice the itch of sharing when it arrives, let it buffer and sit around my mind for several seconds, and then just watch it until it leaves by itself. The more I practice it, the easier it gets over time.

Sounds like a lot of work? Who said sharing was easy? ;)

In the end, the entirety of this article can be summed with up the advice given by our Prophet Muhammad SAW:

The Qu’ran also says in Surah Al-Ahzab the following:

“O you who believe! Fear Allah and speak a word that is right. He will set right for you your deeds and forgive you your sins. And whoever obeys Allah and His Messenger has certainly attained a great achievement.” (Qur’an, 33:70-71)

And lastly, if the above reminders are not enough, may we be reminded of the following hadith before we go share-happy on every content we deem interesting:

The Prophet SAW said: “A man might speak a word without thinking about its implications, but because of it, he will plunge into the Hellfire further than the distance between the east and west.”

May Allah SWT make it easy for us to guard our tongue (and fingers). May He SWT bless us with the wisdom to see Truth as Truth, and to be patient with falsehood coming from outside and from within us. Ameen!

12 thoughts on “How to avoid the mistake of harmful sharing”